January is a time of new beginnings and so it is for Esther's Fabrics in many ways. I bought the shop almost three months ago, and it has been a time of real change both personally and professionally. I left an engineering career 16 years ago to stay home and raise my children who are now in middle and high school. Two years ago we moved across the country from a farm in Virginia to a house near the water on Bainbridge Island. The opportunity to buy the store come up at the end of last summer and after a lot of family talk, talking to those in the community, and soul searching, my family bought Esther's Fabrics. I am the eighth Esther in a long line of women since the first, Esther Fox.

Esther Fox founded Esther's Fabrics under the corporation Esther, Inc. in 1959, just two years after the grocery Town and Country opened. These are two of the oldest stores on Bainbridge that are still operating today. It is said that Esther's is the oldest fabric store in Washington state. I am not sure about that, but I have to say it is one of the most beloved. This store has passed from one woman to the next. As I said I am number 8, and hopefully I won't be the last and Esther's will thrive under my stewardship until the next Esther arrives. 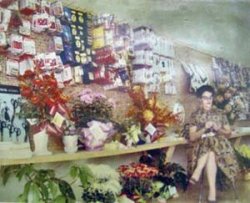 
In this blog and website we hope to show off our new fabrics, introduce you to our staff, our instructors, and through the tutorials give you some creative ideas you can make yourself.

I have made a few changes to Esther's. We have added independent pattern lines such as Decades of Style, Grainline, Colette, and Oliver + s, plus the Finnish Named patterns are arriving soon. We have added more fashion fabric and have a lovely collection of shirting, silks, wools, double gauze, and knits. But, we have also kept a large selection of quilting fabric. We have a classroom and machines that can be rented by the hour if you need to finish a project, or your machine is on the fritz, or you just want to try machine sewing before you make a commitment to a machine purchase. We have lots of buttons and ribbons, and a large selection of notions. We have a large cutting table that our customers are allowed to use anytime, and a comfortable seating area for your friends or spouse who may not be as enthusiastic about looking at fabric as you are. Come by and show off your work; we love seeing all the projects that you do, and we love to share our latest works.
Please come by and visit Esther's, we would love to see you. If you need a place to rest, just drop by and sit and work on a project. You are always welcome. 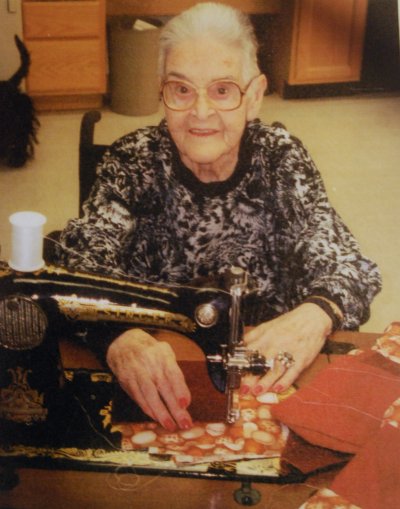 Esther Fox at her machine in her later years.