The Joys And Benefits Of Stitching 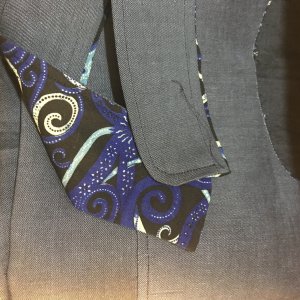 My first attempt at a men’s shirt, made for my son’s Christmas present.

Have you ever been doing something that so engages your brain that you lose track of time? This question was one of the college essay questions last year. My son and I discussed this question, which questions he ended up answering I will never know, but the talking about the question, led us to an interesting discussion in which activities for each of us could elicit that response.

In the last few years more and more research has been published discussing the benefits of crafting. Art therapy has been around for many decades in the mental health treatment world. But in the last decade there have been many studies discussing the benefits of crafting for the general public. Ann Futterman Collier, a clinical psychologist who researches the well being of women who create textiles, found that she was “better able to cope with life, put adversity into perspective, and to stop ruminating.” Dr. Collier then decided to do research into this topic. She found that “the more engaging these activities (weaving and quilting were rated as the highest), the more effective it was at mood repair and rejuvenation.” Not only does craft improve mood, but it also allows people to feel more empowered through the ability to self manage and control the process. In one study, Dr. Collier found that compared to nonart makers, art makers (69%) reported greater rejuvenation, flow, self-realization of values, and mood repair. These outcomes were not correlated with age, income or education, and there results linger after participation.

In addition to mental health benefits, there are many other benefits to crafting. It creates human connection. I see nearly every day in our store, crafters are very interested in other’s work and quickly engage in a conversation with a stranger about their work no matter age or gender. It binds us all together and working together in a group builds needed emotional connections. Crafting also builds self esteem through the reduction of stress, and the ability to “fail safely” and the opportunity to fix those failures. I have found in my own work that the “failures” often lead to the more interesting aspects of the work that people enjoy the most about a piece. Finally, crafting builds a feeling of accomplishment. In our social media world, too often what we post can be easily dismissed by people who only have to click a few keys. Crafting an object gives us control, and a tangible product that objectifies our struggles and gives the product of our work even more meaning. Finally, several studies have linked crafting such as knitting and quilting with a reduction of odds in having mild cognitive impairment (30-50% reduction).

Textile arts have been a part of women’s work for eons. I remember reading a book that discussed the power that women held in Viking culture due to their skills of weaving cloth. That cloth woven by the women of the community, sometimes as much as a mile’s work of cloth, was loaded onto Viking ships and used in trade. With the industrial revolution, textile skills began to disappear, and then in the 60s and 70s those skills such as knitting, sewing and weaving were rejected and denigrated as being domestic, old-fashioned and dismissed as something your grandmother did which was not really worth valuing.

I too fell into this way of thinking in my younger years. Although I did enjoy the clothes and sweaters my mother made for me, I dismissed the thought of learning those skills as being less important to me than building a strong career in a technical field. I truly began to craft while in graduate school when I learned to knit, and found it to be an antidote to the stresses of classes and exams. However, I often hid my knitting as I felt it would be seen as quaint and not a serious pastime for an woman engineer.

Luckily, we seem to be going through a renaissance in the crafts. People are beginning to see the value in the ability to craft something for yourself, and to look to elders to learn from their experience in their ability to make things. If you have never done this, try and find a vintage book on sewing, pre-WW2. You will be amazed at the high level of craft and presumed knowledge of these sewing books. Our current craft books seem naive in comparison.

So, in this new year, do something for yourself and the others around you. Learn a new skill in crafting. It will be good for you, for those around you, it will bring you joy, and at the end of the experience you will have something tangible to enjoy yourself or to give to another to enjoy.